On a delirious sunny summer’s day in May

It hadn’t rained for over six weeks —and to make that statistic ever more amazing it included a bank holiday weekend! The result was the new, exceptionally large, field was really very dry.

For many events that should not be a bad thing however it does allow the more modern cars to put down their immense power to their wide tyres . Had we had a good rainstorm a week or so before the event and ideally light drizzle overnight then the more elderly, heavy machines with a thinner tyres, might have a bit more of an advantage (or that is my excuse anyway).

This was the first time in very nearly 4 years that I have entered any kind of motorsport.  Here in the Southwest Centre we have a reasonable calendar of events most of which had to be cancelled during the varied Covid restrictions.

The disruption was compounded by an illegal rave on our traditional site of Charmy Down, because they had left behind a lot of broken glass and needles and all sorts of antisocial objects.  So we cast around for the field and Dave Coppock found one near Weston-super-Mare this was considerably larger and more interestingly varied than the flat 2nd World War Airdrome used for many years in the past.

We were not sure about how many people would be ready to start entering again after such a long break. The organiser of this event, one Victoria Jones, spent a great deal of time tracking down the e-mail addresses of those who had entered in previous 18 years and sent all details to them.  Alas for various reasons this was done at rather the last minute so she had many “Sorry but we have already……….”  Something of a wakeup call for next year promotions.

One of the other exceptional encouragers was one Rob Constant of the Vintage Register who ‘phoned, chatted to and in many ways encouraged the owners of older vehicles to enter—but entries were there none.  Undismayed he came all the way up from Cornwall to the event and marshalled in the scorching heat all day, then drove home again.

In the event we had a glorious 15 entered for some of whom this was their first competitive event.

They came from the local area; Bristol and Somerset (10), Gloucestershire (2), Dorset and Herefordshire (2) and, to add an international flavour, Wales (1)—it would seem that 4 or 5 hour round trips are not unusual to have fun for a day doing mildly competitive things in a field.

The smallest class was Vintage with but one 18/80 and the biggest was the Midget class with 5 entries (actually David Star’s was a frog eyed Sprite but we pretended not to notice) Class winner was Chris Pelmear.

Next came the T types with 4 entries comprising 2 TAs, one each TC and TD—Dave Coppock came first in his ‘Union Jack’ TC.

They rest were classed as moderns which comprised one each of an MGZR, MGF, MGC, MGB.  Mike Angwin came first in the MGF, followed by Andrew Morris MGB ½ a point behind him after 20 attempts over the 3 tests!

The overall winner was John Delafield in his amazing Midget. Your scribe came a rather ignominious last, 249 points behind him.  My score not helped by 3 ‘wrong tests’ and forgetting to do my last round on test 2!  However I consoled myself for being the 1st in the vintage class!

But as I have said, ground conditions were not ideal for the more majestic machinery.

Yours with no bias whatsoever.

The event results can be found here https://www.mgccsw.com/mgs-on-grass-1-results/ 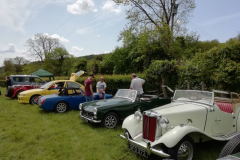 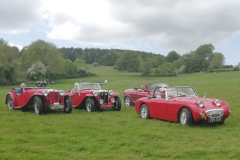 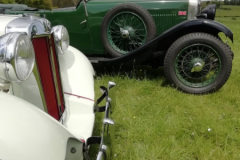 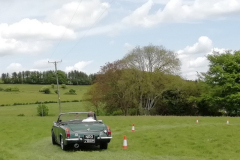 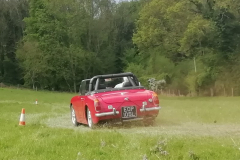 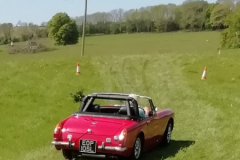 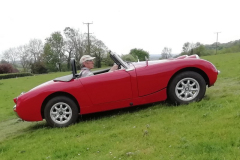 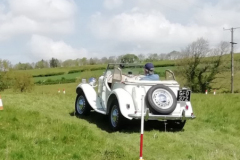 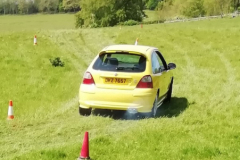 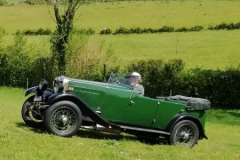 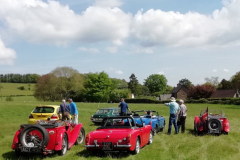 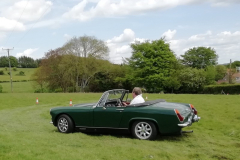 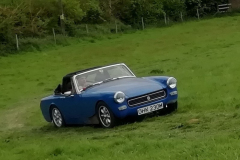 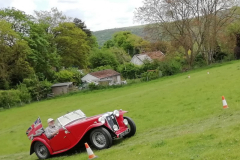 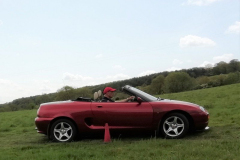 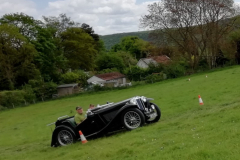 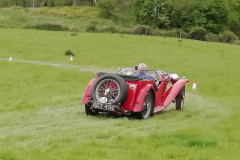 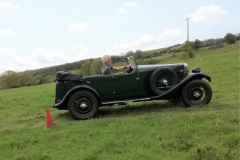 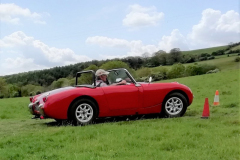