The weather was stunning—wall to wall sunshine with not a cloud in the sky as the dozen or so cars assembled for the 10am start at the Charmy Down exWW2 airfield where the famed M.G.s on Grass 1 is held.  Three tests were laid out on the nearly flat, long grass surface and all competitors enjoyed four attempts at each in the morning before disappearing off to the Catherine Wheel in nearby Marshfield for a super lunch where there was talk about the mornings escapades and much else as well.

Commiserations should go to John Bird, who arrived in his lovely red Midget but on stopping found a lot of blue smoke coming from under the bonnet—it appears an oil way had started to leak rather dramatically as he drove onto the site precluding any further travel under the vehicles own power.  Also to a member, whose name I have unfortunately forgotten, in a super red TF (of the 1950s variety) who had been dogged by overheating in his recently acquired machine.

Last year, by some mischance, we had more marshals than entrants (and that doesn’t happen very often) but this time the organiser, Victoria Jones, was worried that she would be the only one!  Luckily Richard Lucking arrived in his fabulously unrestored Land-Rover and as this year, as we also had invited our friends of the Pegasus Motor club, father and son Horsfield came to have a look and ended up with High-viz jackets marshalling Test 2.  Jolly handy really.

After the leisurely lunch we returned and re-arranged the ‘long’ test 3 and did something entirely different to test 1 and the entrants enjoyed a further 3 attempts to these renamed tests 4 and 5, excitingly modified by committee.  So that was 18 attempts at the various tests and all for a mere £10 entry fee.  As Ralph Colmar, the only Pegasus entry, commented “I don’t know why there isn’t a queue at the gate for this much fun for £10!”

Ralph came in his VW Golf Estate (and haven’t Golfs grown over the years)—perhaps not the most competitive car but he seemed to be enjoying himself.  The only MGB (the world’s favourite sports car….) was expertly piloted by David Starr and the only MGF (surely the cheapest M.G. sports car to buy these days with many under £1,000) was daintily piloted by Tony Blake, who was the only one to send his entry form in before the event !

MMMs honours were upheld by Kim Dear driving his dad’s old PB with Steve looking 40 years younger than his geological age beside him.  Only 2 T types with Frank Vautier (who set off at 6am all the way from West Wales just to get there in time) in his TA and Peter Jones in the rather too ‘well used’ looking TC but the best entry came from the Midgets with a whole 5 entries from the Delafields, Withers and Ian Beningfield.

It has always seemed strange that only half the entry are locals—others come from way up North, West Wales, Taunton and Gloucestershire.  Where are all the Bristolians, Bathites, Chippenhamese, Swindonites and Trowbridgeans, for whom it would only be a half hour jaunt to the start, one wonders?

The results were roughly calculated after the event (we drop the worst score in each test so that if you make a mess of your first go it doesn’t ruin the rest of your day—after all this is supposed to be fun!).  A final and more carefully spreadsheeted version will be sent to all those whose e-mail addresses can be read from the hastily filled in entry forms.

Next up is the Kimber Classic Trial, the Wye Valley run and July Treasure Hunt please go to http://www.mgccsw.com for more details. Why not turn up to one or more of these exciting meetings—its a lot better than DIY, mowing the lawn, watching TV and infinitely more fun than Playstation……. 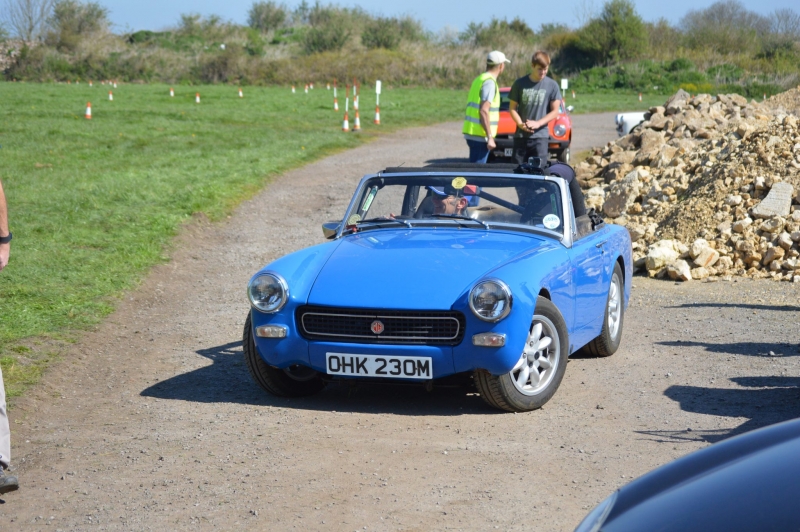